A new clinical trial will test whether it is possible to destroy hidden reservoirs of HIV virus that are a key obstacle to curing the disease.The RIVER trial is one of the first clinical trials to test a new idea of how to cure HIV. As well as standard HIV treatment, it includes different medicines that wake-up a 'reservoir' of infected cells that have sleeping virus inside them and kills them using the body’s own immune system.

HIV is a viral infection that is treatable using Antiretroviral Therapy (ART). ART stops HIV from replicating itself and by doing so reduces the amount of virus in the blood stream to such low levels that it prevents virus from being passed on and allows the body and immune system to recover to normal.

We can only truly know if someone is cured of HIV if we stop giving them antiretroviral therapy.

However, ART alone cannot cure HIV. This is because ART only works on HIV infected cells that are active, and most cells infected with HIV in the human body have resting or sleeping virus. These cells represent an invisible reservoir of HIV, and are one of the reasons it is so difficult to cure the infection. If ART is stopped, the virus returns, which means that ART needs to be taken every day for life.

There is a strong interest amongst people living with HIV as well as researchers to look at different ways that could help to cure HIV and allow people to remain healthy without needing lifelong medication.

'We can only truly know if someone is cured of HIV if we stop giving them antiretroviral therapy,' said Dr John Frater, of Oxford University, who is leading the trial alongside Dr Sarah Fidler of Imperial College. 'We’re not going to do that, but we will test if we can reduce the number of HIV-infected cells in these patients. If we can, it will prove in principal that this strategy could work as a cure, even though it will need many more years of development.'

The study plans to test a new approach to HIV treatment, where in addition to standard ART, novel drugs are being tested to see if they can wake up or activate the HIV infected reservoir cells. These cells then need to be removed by cells of the immune system. A vaccination teaches the cells of the immune system to recognise activated reservoir cells, and kill them. This idea has been called 'Kick and Kill'.

Around 50 patients with recent HIV infection will take part in the RIVER trial. All study participants will start ART immediately. The additional medication that wakes up the virus from the reservoir cells is called vorinostat, a drug that is usually used to treat cancer. The study will also use two vaccines that help the immune system to recognise these newly activated reservoir cells and kill them. In this study, Vorinostat is the 'kick' and the boosted immune system is the 'kill'. 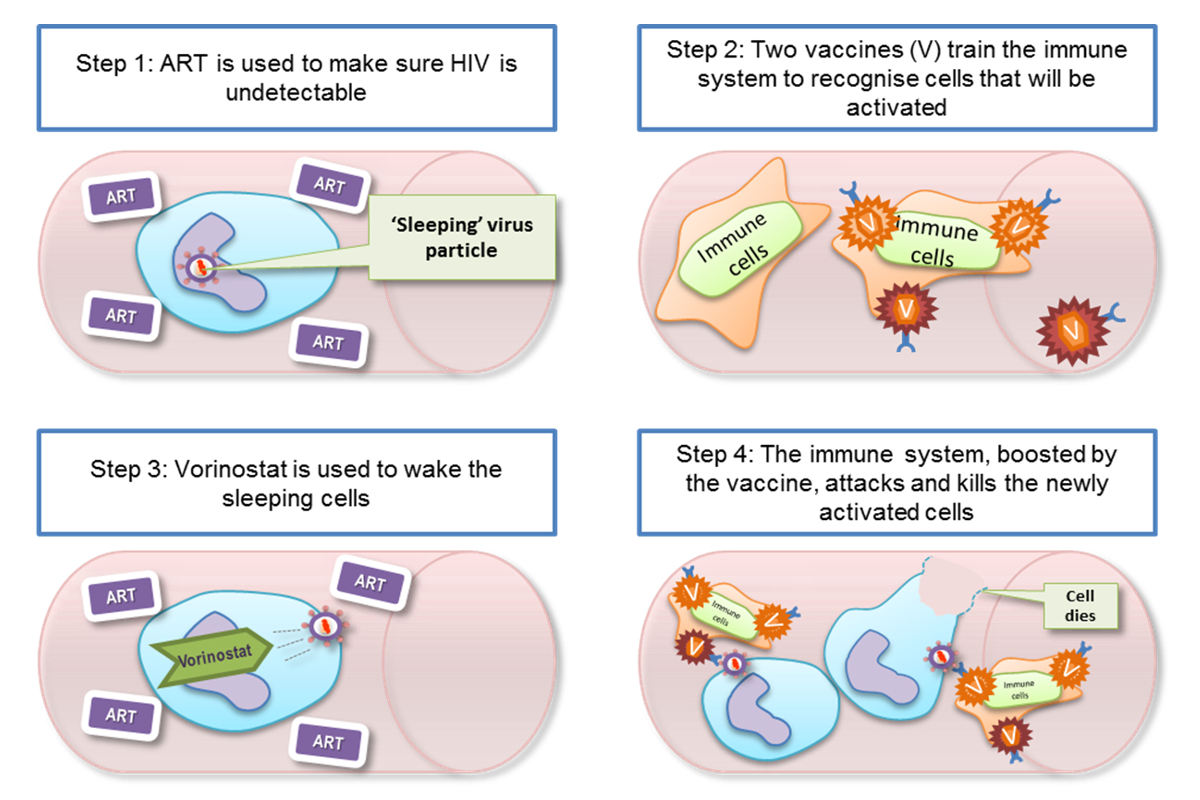 The results of the RIVER trial are expected in 2018.